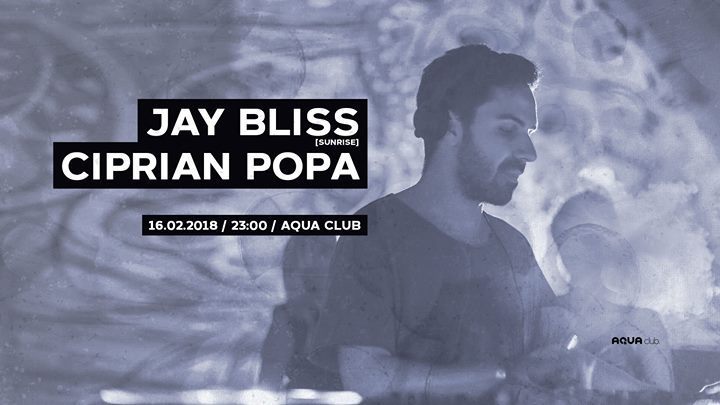 Jay Bliss is Iulian Cazan, a Bucharest-based DJ-producer.
He became involved with music just before the turn of the Millennium. Romania, at this time, was still in post-communist transformation and an underground music scene was just beginning to bubble. Growing up in Sibiu, Transylvania, Iulian organised underground mobile raves for over two years. It didn’t take long for him to learn to DJ and earn himself a residency at Chill Out, a 300- capacity venue that quickly developed a cult status across Romania. He continued playing there all night long each Wednesday until 2008, becoming a well-known and widely respected selector on home soil. He’d also warm up for guests on the weekend provided he wasn’t booked elsewhere. It was a formative part of his career. During this time, Iulian also started Electrique Boutique with Markus Homm. Opening in 2004, it became one of the country’s first ever record stores — though it struggled because the scene was very much in its infancy. There were not many DJs in Romania and only a few of them were into buying records. It closed down in 2007. Yet it proved to be a valuable experience. Using this musical knowledge and the connections he developed, Iulian continued DJing and won various awards along the way. He began travelling outside of Romania around 2006, and he continues to play through Europe and the Americas today, showcasing a sound that sits somewhere between house and techno, with strong Detroit roots. He is signed to the Sunrise Booking agency. Iulian began experimenting with production in the late ‘90s while studying computer science. By 2005 he had started to take music production “seriously,” and his first release landed in 2008 as Hermannstadt Collective — a collaboration with Mihai Popoviciu and ToyGUN. His debut solo EP landed soon thereafter on Smoke City Music, presenting Iulian’s deep and organic sound. Further releases have since arrived thick and fast, including a 2012 EP featuring a Petre Inspirescu remix and a 2017 LP titled ‘Vrăjitorul din Orz.’ The six-tracker was the result of a “production spree” inspired by a two-year spell during which Cazan sought fresh inspiration. “I just felt like I was doing the same thing over and over again,” he explains. His 2016 ‘Paloșul’ EP as Iovan Iorgovan was written around the same period. Elsewhere, Iulian runs the Stomping Grounds label and the Vade Mecum sub-label. The former is focused on “timeless music,” hence it sees around only one release per year. In contrast, Vade Mecum is more dynamic and free-flowing.
https://soundcloud.com/jaybliss
https://www.facebook.com/jaybliss.ro/