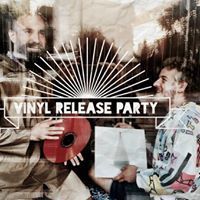 BIO: began making music based on the rules and strategies of chess. There are many correspondences between chess and music, some obvious (8 notes - 8 pawns) some more esoteric (King and Queen with their suites correspond to the two tetra-chords of the octave) It seems complicated but the result is always a very positive and danceable sound. The duo draws inspiration from Oriental folklore (as chess is an Oriental game) but they add powerful 80's electro dancefloor sounds. They have released two EP-s 2011 and 2013 that were re-united in an instrumental LP released end of July 2015 with Polychrome Sounds (Berlin). New material is on the way, to be released late autumn 2015 at JunoRecords (UK) The band has been on three European tours in major cities like Berlin, Vienna, Milano, Florence, Warsaw, Budapest, Dusseldorf, Belgrade, Torino, Leipzig, Hamburg, they've played on some festival stages like Fusion Festival, Electric Castle and Warsaw Contemporary Art Festival, and they've been aired on WFMU New York.
Live shows often include aerobic classes, contemporary dance moves, silent movie screenings, ballet acts, or projection of live chess games played by the audience.