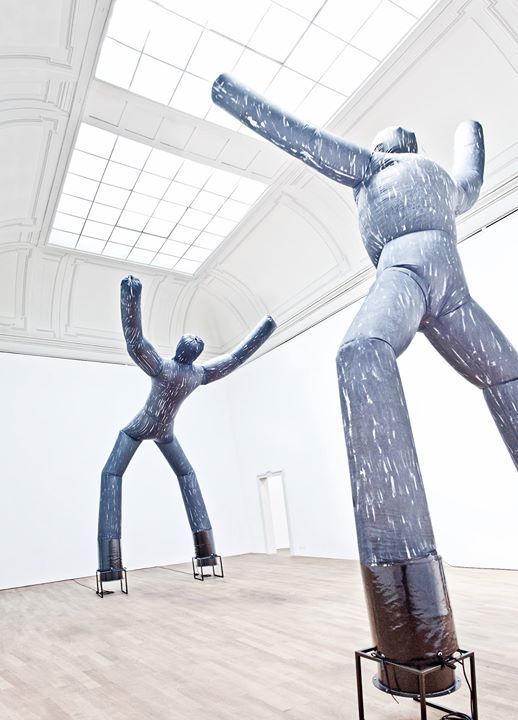 Dizzy Spells is a kinetic installation with two inflatable windy men and a modified harmonium. Usually funny and colourful, their grim looking features are no longer reminiscent of a fun park or a child’s birthday party; if anything, it would be a dark fetish room that is brought to mind. Konrad Smolenski represented Poland at the Venice Biennale in 2013 and made quite a lasting impression with his Everything Was Forever, Until It Was No More installation.

The organic mix of bug beats and atmospheric soundscapes uncovers a sonic ambiguity between rural nature, electronics and the human voice, creating a peculiar musical universe with references to low-fi pop and techno. Native Instrument is a Berlin based sound collaboration bringing together the field recording archive of Felicity Mangan and the precise, minimal vocabulary of Stine Janvin Motland. Their music is built from electronic and vocal adaptations of animal and insect recordings originating mainly from the Australian and North European fauna.

Peder Mannerfelt takes us back to Belgian Congo in the 1930’s. “The Swedish Congo Record” finds its roots in a very obscure 78rpm record, put together by Belgian filmmaker Armand Denis, who was one of the first Europeans to capture the incredible sounds of Central Congo. These recordings were published in 1950 as “The Belgian Congo Records”. His initial idea was to use the original album as a sample source, but this concept was quickly abandoned and Peder decided to recreate the album using only synthesisers.

Primitive Art is an experimental music project started in 2011 from the collaboration between Matteo Pit and Jim C. Nedd. Digital soundscapes, slow rhythms and material percussions constitutes the high definition background of their verses and shouts. Through the fog, they elevate their dub elegy, the perfect soundtrack for the corrupted metropolis of the future."

Rokolectiv Festival is part of SHAPE, a three-year platform co-funded by the Creative Europe programme of the European Union