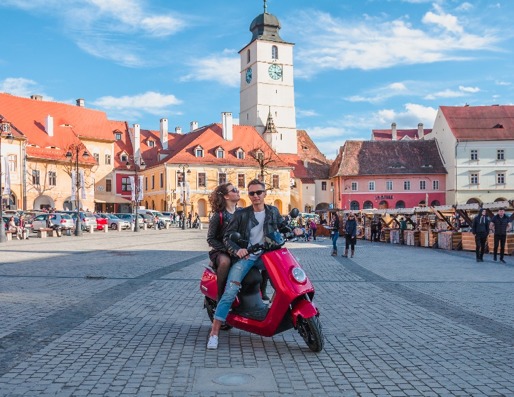 I had a dream, to give my friends the opportunity to spend their free time strolling and admiring the beauty of Sibiu and the wonderful places around it. I wanted to offer to those who choose me the chance to enjoy the charming, medieval streets and the scents of the terraces full of flowers – all with the help of a simple, comfortable and environmentally friendly mode of transportation.

That's how I was born, MyScooters, a 100% electric scooter, which works without noise and pollution. You could plan a road trip of about 70 km with me, after which you have to recharge me. I could carry two people, who I will spoil with phone accessories and headphones.

After I was recharged and my friends enjoyed their coffee, we left Sibiu to Cisnădie. The textile industry's reputation here is due to the guild of weavers, whose logo could be seen to this day on the city's coat of arms.
Even though the interior of the fortified church complex is closed until 2021 due to some restoration work, the tower, on which the first lightning rod in Southeast Europe was fitted, could be seen right next to the artesian fountain in the center, where we took our first break.

From the road near the apple orchards, we admired the majesty of the Făgăraș Mountains on our left, and the fortified church on St. Michael's Hill, to which we were heading. Here, I took a break, while my friends went up the hill to see one of the best preserved Romanesque churches. On their return, they told me about the romantic landscape surrounding the fort, and the round stones near the hundred years old wall.

We stopped on Mărului Street at the apple orchard complex - Apfelhaus, where the hikers recharged their batteries with delicious snacks, and quenched their thirst with freshly squeezed apple juice.

We passed from Cisnădioara to Dumbrava through the heart of the forest, a landscape seemingly taken from the story of Hansel and Gretel, and turned left towards Rășinari, the gate to Marginimea Sibiului. Local people, sitting at the gates of their houses, offered us cheese specific to the area. My friends could not resist the temptation and tried the “telemea” cheese, the kneaded cheese, and sheep sausages. We found that the "Cheese and Țuică" festival is organized every August on the Curmătură plateau – therefore we served a coffee at the “Mai” Guesthouse, to decide where to go next.

From here, we could hardly choose between the windy road towards Păltiniș and the one to Poplaca. We chose the second option, following a road of unique beauty, with hidden hills and valleys, flanked by the magnificent Cindrel Mountains. In Poplaca, we allowed ourselves to become lost in the village and we talked with the locals.

Exhausted by the countless experiences we had, we travelled back to Sibiu following the road near the polygon, from where we could glance another village that we intend to visit next time. The shade of the terraces in the Small Square (Piața Mică) was the ideal place to end the MyScooters adventure around Sibiu.